A lot of our supporters have been messaging and commenting as to how Save The Orphanage Property (STOP) compares to others around NCC, including several golf courses. Many, if not most of these other battles involve a proposed rezoning on the part of the developer. What was originally zoned as, i.e. "low density suburban" (1-3 homes per acre) is being eyed for, say, 5-6 to increase profits. High density can be much more than that (townhomes, apartments, etc).

What it boils down to is this; the "Chestnut Hill (so-called) Preserve" -CHP- is what's known as a "by-right" plan, that does not require a rezoning. Even though it contains high density, the developers agreed to save about 70% of Orphanage Property as dedicated open space, allowing them to consolidate on the portion (the only buildable portion) that we are attempting to save for a regional park. It's referred to as an "Open Space Plan", but in our case, it's deceptive because that 70% is inland wetlands and critical habitat area, and is not buildable property in any case. And to top it off, the CHP plan calls for shutting down all trails and public access to that remaining 70%, which is very popular now with area residents as a sort of defacto park.

A by-right plan is a virtual given, and is very difficult to stop unless the landowner is willing to sell. And that is exactly the situation STOP has and why we have to act. A rezoning, on the other hand, requires legal approval. Resident's groups usually sue to try and stop it, hoping to enforce the original zoning. Nothing says a property MUST be rezoned, but as we have shown, development interests have spent many years lobbying and chipping away at our land use codes. NCC's Unified Development Code (UDC) has been steadily weakened over the years, in favor of developers over us citizens. One look at our Transportation Impact Study (TIS) for the CHP clearly makes that case. Will Executive Meyer allow this trend to continue? Time will tell.

Battles brewing over golf courses and other last remaining open spaces in NCC should be of no consequence to STOP. Most are fairly recent, and if residents do take up the fight, challenging a rezoning could be tied up in litigation and TISs for several years to come. It's all they have unless a dedicated source of open space funding comes on line and the property comes available for purchase. STOP is today, it's act now or we lose it forever.

An article recently appeared in the Wilmington News Journal, which explains it rather well with the Brandywine Country Club as an example. Excerpts:

Now, Capano wants to use the grounds to build 408 apartment units in 12 three- to four-story buildings and 155 new homes ranging from small townhouses to larger single-family lots. The land's current zoning will allow less than half of that, so Capano plans to ask New Castle County Council to approve a rezoning in the coming year.

Neighbors accustomed to a relatively quiet place say they will fight to stop that rezoning in an effort to protect their piece of Brandywine Hundred, Delaware's oldest and most densely populated suburb.

They fear two-lane roads will be overloaded with traffic. They abhor the thought of losing open space that for 70 years was a golf course. And they worry the apartments will change the neighborhood's character with renters, who have less invested in their community. [Full article ...]

So we hope that our readers have a better understanding of what's at stake. Land use advocacy is very complicated and difficult to sort for the average layman. Developers count on this when the public rightfully cries foul over the decimation of our natural landscape and the increased noise and congestion it creates. Advocates must take back the UDC, and put NCC back on the path of responsible and sustainable development, one that gives citizens the voice in preserving and/or improving the quality of life -- developers and for-profit business interests come second.
Posted by Frank Warnock at 10:31 AM No comments:

Email ThisBlogThis!Share to TwitterShare to FacebookShare to Pinterest
Labels: Land Use, STOP, Zoning

STOP may come down to a NCC Council vote

We cannot confirm right now, but it is rumored that saving the Orphanage Property for an Ogletown regional park may come to a NCC Council vote. This is not good news, folks. Typically, the county will go this route when something is this highly charged, as a way to shift blame from the District representatives should it be voted down.

Unfortunately at this time, we are unlikely to have 7 of the 13 Council votes needed to compel Executive Meyer to action on our behalf. It could actually come down to other councilfolks from other regions deciding our fate, those who may never see or even set foot on the property. We are not even certain if our own Councilwoman Lisa Diller is a yes vote, as she does not communicate with us and has blocked us from her page. Not only should she be a yes vote, she should be actively advocating her colleagues to do the same, and support this acquisition for the people of Ogletown. When a councilperson takes this initiative, the odds of it passing go up exponentially.

If what we have heard is true, we will be tracking the different council members as it unfolds. We urge you to SHARE this post, and consider contacting your own Council rep and ask for their vote in favor (or reason for not). You can scroll back on the Facebook page over a 2 year period, and arm yourself with all the facts and figures for why this development should NOT go forward! 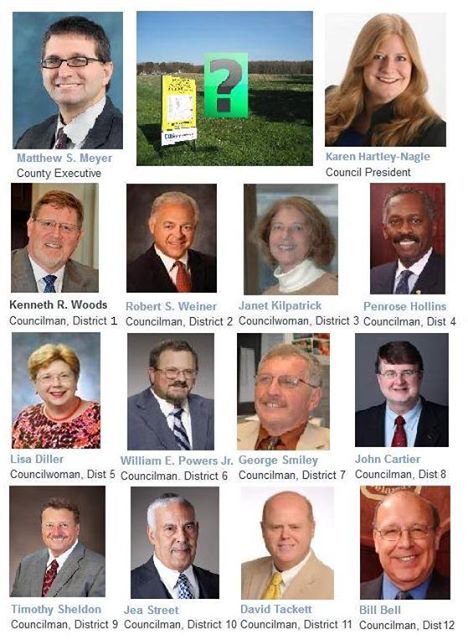 Posted by Frank Warnock at 7:44 PM No comments:

Hat-tip goes to Karie Simmons for an excellent article in the Newark Post. Hope for a regional park in Ogletown remains strong, but with Councilwoman Diller an unwilling champion, it will be difficult to track Exec Meyer's progress. As much as we would like to back off and trust that our leaders will follow through, episodes of poor decorum and lack of communication remains a stumbling block. Excerpts:

New Castle County Executive Matt Meyer says he is “committed” to finding the funding the county needs to buy the Felician Sisters’ 181-acre parcel on East Chestnut Hill Road and turn it into a public park.

“Not only am I committed to it, I’ve already made numerous phone calls about it,” Meyer said Tuesday during a Civic League for New Castle County meeting.

Several members of the group Save The Orphanage Property (STOP) – formerly Save Ogletown Pond – turned out to the meeting at the Christiana Presbyterian Church on North Old Baltimore Pike to protest the controversial housing development planned for the land at 487 E. Chestnut Hill Road, which is just east of Newark, and press Meyer for updates on the community’s desire for a park there instead.

Angela Connolly, a Todd Estates resident and STOP co-founder, said that over the past two years she has spent fighting the project, she has often heard the words “last chance.”
[Full article . . .]

Posted by Frank Warnock at 7:31 PM No comments:

The Orphanage Property proposed park and trail system should be of interest to many of our readers. I mapped it by GPS last year when we first learned that it is threatened by an enormous mixed housing development. As many of you know, we are in the fight of our lives to save this beautiful landscape as a regional park for Ogletown - something that is desperately needed.

Ogletown residents have been vastly underserved when it comes to parkland and open space. None of NCC's regional parks with amenities are within a safe walking or biking distance of their homes, while other regions including Pike Creek and the City of Newark are continually adding them.

The easiest way to access the trail system is Pearson Drive, through Todd Estates II, south of Route 4. Pearson dead-ends at a major trail head with room for parking. Use caution; there is a small chance that you may encounter ATVs. The trails are mostly hard packed dirt, with occasional erosion and low spots that need restoration.

Please visit our facebook page dedicated to the cause, and consider liking us today!

Posted by Frank Warnock at 6:35 PM No comments: