Privilege Has It's Rewards: Part 5

This post was featured on Bike Delaware's Facebook page on April 11. It's pretty self-explanatory, in terms of what regions of New Castle County receive priority based on socio-economic status. Surely, Rep Osienski will head over there again, outside his District 24, to help cut the ribbon with Baumbach (Rep, 24th) when completed. Bike Delaware is a developer's wildest dream, in terms of a corrupt org that drives advocacy only for the privileged few; forget the 'unwashed' -- or those living in the vast suburbs that include Ogletown-S. Newark. 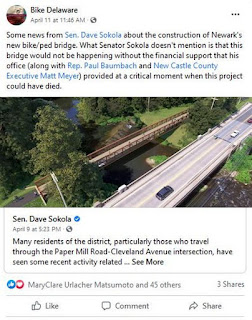 Posted by Frank Warnock at 12:04 PM No comments:

Email ThisBlogThis!Share to TwitterShare to FacebookShare to Pinterest
Labels: Corruption, Land Use, Trails

Surprise! (not): Delaware 5th loudest State in the U.S. 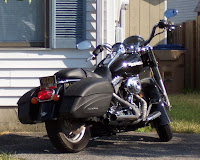 Time and time again, Delaware fails miserably when it comes to leadership and quality of life. Here is yet another measure reaching the top 5: Noise. This study only crunched some numbers, and cited statistics, but it failed to include other factors such as law enforcement (level of, lack thereof). It didn't include the colossal failure by the State and its various Police agencies to penalize and/or prosecute for drag racing and modified vehicle exhaust systems. These include "fart can mufflers", straight pipes or other modified systems that vastly increases vehicle noise. For most residents living in New Castle County's suburbs, for example, even a half mile from the nearest arterial road can sound like track-side at a NASCAR event. Many people hear it inside their homes, even above their TV, especially on weekend nights. There is no police enforcement of this crime, so the offenders know they can get away with it. Often times, the decibel on acceleration is 120+ decibels, which if you're a pedestrian or bicyclist, is hurtful or damaging to the ear. This is assault, and 100% illegal according to Delaware law, in multiple code sections (HERE & HERE). Yet, as expected, it gets a free pass by Townsend and cohorts. 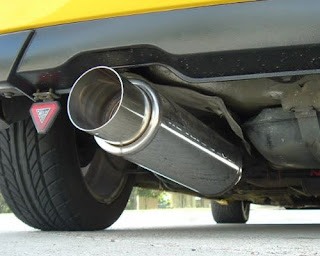 Where is Senator Townsend on this? Nowhere, that's where. He would rather pass a bill to criminalize snow on car rooftops, that may happen a few times each Winter. On the other hand, oppressive and painful vehicle noise from non-standard illegal exhaust systems goes FAR further in destroying the qualify of life, health and wellbeing of everyday Delawareans. Why doesn't Townsend and his Democrat-controlled legislature introduce a bill to step up prosecution of this deliberate and disgusting act by a small minority that hurts the clear majority, AND wildlife? Even the City of Newark and University Police won't enforce deafening vehicle noise, in an environment rich with walking and bicycling on or near the roads.

Senator Townsend, along with Rep Edward Osienski and NCC's Lisa Diller are the epitome of failed leadership. Not just in Delaware, but any State. Until we rise up and hold them accountable on issues like this, there will be no end to the corruption, in sight. Delaware is represented by the 4th most criminal State govt in the nation. Its residents have to act and vote with this in mind, in order to stop them.
Vehicle noise assault on a "complete street" in New Castle County, Delaware.
“If anyone walking along the sidewalk were to make deafening noises, spew poisonous gas into innocent faces, and threaten people with a deadly weapon, they would be arrested. Yet a few feet away, on the public roadway, it is considered normal behavior” ~Steve Stollman
Posted by Frank Warnock at 3:54 PM No comments:

In Walsh's Senate District 9, equal LOS for non-motorists is a foreign concept 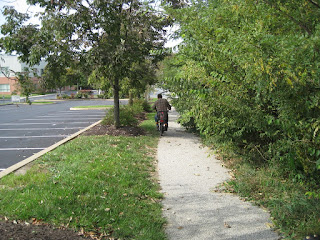 What is your plan for 2021, to repair and maintain what few asphalt pathways are in your region? These serve as vital connectors for foot/pedal traffic. As of right now, and last year, they are an unmitigated disaster. We have attached a few pics in this email that you should recognize, but there are plenty of others.

Rep Baumbach is busy cutting ribbons on parks and pathways projects in his district all the time, in Newark. But yours -- like [Senator] Townsend's -- is like a 3rd world country, at best.

What are you going to do about it?   -- Frank Warnock & Angela Connolly 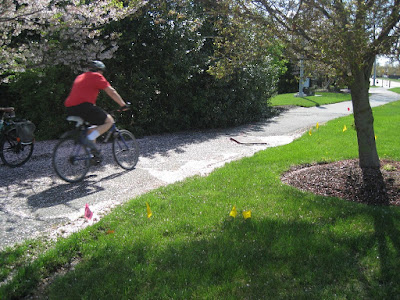 Above: An overgrown hedgerow and a 2" raised steel plate are the ultimate crash hazard along Wyoming Road. Yet this is routinely used as an extension of Newark's Hall Trail. 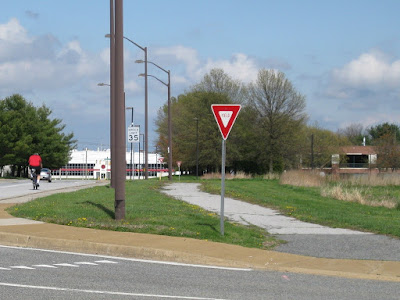 Above: Abandoned pathway along Wyoming Road in Newark. What was once wide and appealing for multi-modal use is avoided in favor of the road shoulder. 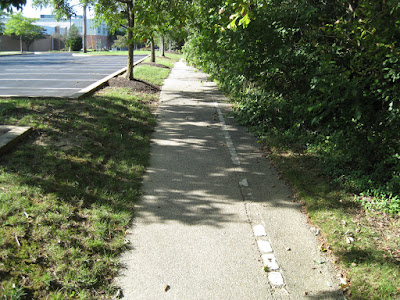 Above: What remains of a pathway spur connector, between Prides Crossing and East Coast Greenway along SR4. 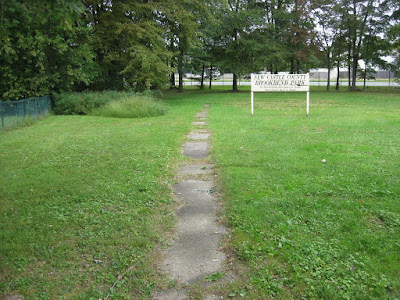 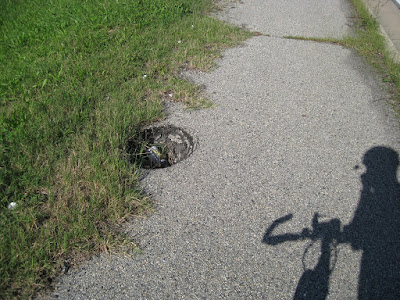 Above: Bike Path, aka East Coast Greenway, parallel to SR 4, also in Walsh's District 9. Walsh could ask DelDOT to rehab this facility, and others, perhaps attached to local road rehab projects.

Walsh's reply as of 4/14/2021: I had previously answered your question on one of these paths. It is located on private property and the Church is required to clean up the path. This is the first I am hearing about the other two paths. One path pictured is the county's responsibility, so I can reach out to Councilman Sheldon's office about that one. The other path is on Route 4 and I will contact DelDOT to get them to clean that up.

No, Walsh did not answer anything, not in writing. We can find nothing in writing, and requested that he forward any sent emails that may have been overlooked. "3rd World Country" as defining Walsh's District 9 (and Townsend's District 11) for pathways, parks and destination/place-making is 100% accurate. It may even be an understatement. Will he answer our inquiry above, with a serious action plan? That remains to be seen.

Posted by Frank Warnock at 9:12 AM No comments: