Greetings, Wilmapco. Please add our comments below to the Churchmans Crossing Plan, before the Sept 2021 deadline. Upon generations of failed elected leadership, and climate catastrophe now looming, the need to facilitate active and green transport modes could not be more dire. Thank you very much.

In no particular order:
Please advise how we may track our comments through the process, to verify if they are being considered for implementation or not. Thank you for listening.

Thomas Ogle, founder of Ogletown, will have passed away 250 years ago as of Dec 23, 2021. Unless something secret is planned that we don't know about, this historical moment in time -- a quarter-millennium ago -- may come and go with nary a peep from regional State and NCC Legislators. According to a reliable source familiar with historical preservation and legislation in Delaware:

Asking your State legislators for a proclamation from the General Assembly is a good place to start. The legislature won't be back in session now until January but a staff person can help draft one during the summer months, and in the opening days of legislative session read it and present it to your group.

Next step: It takes a while to get funding from the State as they have just completed this fiscal year and won't have access to money until next June, but this is the right time to plant the seed. It may take as long as 2 or 3 years as the legislators will have to negotiate with Parks & Rec and DelDOT, but the more clearly you can write a one page proposal of who, what, when and where (about 100 words) and get it to appropriate staff people in those agencies, with cc's to your elected officials, the better luck you will have.

Though most of this doesn't sound very difficult per se, involvement from our end will be difficult to stomach. 3 years of our lives were lost, discarded, thrown away by the region's legislators in our attempt to save the Orphanage Property, which was crushed under the boot of DE government corruption that included conspiracy, profiteering and a rampant conflict of interest.

According to The Ogle Genealogist family publication:

Thomas became a wealthy and influential businessman and planter in New Castle County. He owned three mills and a wharf at Christiana Bridge, hundreds of acres of agricultural and forested land in NCC, and many additional investments.

Thomas built a stylish, two-story, brick house in 1739 at the northeast corner of a junction of three important roads: present day DE SR273, which extended from Christiana Bridge to Nottingham in PA; DE SR4 4 (Chestnut Hill Rd.) from Stanton through Newark DE to the Elk River in Maryland; and Red Mill Road, which ran north from the intersection of SR273 and SR4 to Corner Ketch. All these roads were significant transportation arteries by 1750 and have remained important for 250 years. A fourth highway, Salem Church Road, was constructed in 1827 in a southerly direction from the intersection. 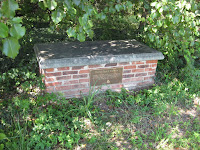 Thomas Ogle's various businesses, large land holdings, and community influence led to the sizable area around his home being named Ogle Town (later Ogletown) sometime before 1762. The stately house, which Thomas also operated as an inn, survived for 216 years. Thomas was buried near the historic house and a reasonable distance from the then narrow, dirt roads that formed the crossroads.

Sadly, it is doubtful that Senators Bryan Townsend and Jack Walsh, Reps Osienski and David Bentz, or NCC's Lisa Diller and Tim Sheldon (all of whom represent Ogletown) will recognize anything about Thomas Ogle and this historical milestone. No park or monument designation, no spur pathway, no kiosk, not even a wayside. And why should they care? The region is socio-economically depressed and undeserving of nice things that include history and place-making. As demonstrated by the STOP travesty, citizen advocacy would likely falter (or even be laughed at) in the face of low to no public or volunteer support.

Around the anniversary date of Dec 23, we will visit the burial site with landscaping tools of our own, and leave a tribute behind to remind Thomas that someone was indeed thinking of him (UPDATE 08/17/2021: we received an email from Delaware Public Archives (DPA) with regard to the Delaware Historical Markers Program. They are supportive of a Historical Marker installed at the site, which can only happen via an application process. Stay tuned for any progress. 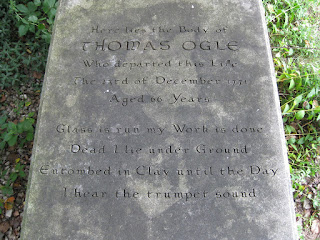 Posted by Frank Warnock at 7:21 PM No comments:

Greetings, DE State Parks. Please add our comments below to the White Clay Creek State Park Master Plan, before the 8-2-2021 deadline. Thank you very much.
In no particular order:
Thank you so much for listening. Please let us know if there is a way to track our comments, to verify whether or not they are being considered.

Above: A hanging cable blocks the entrance to Judge Morris Estate at White Clay Creek State Park. Bollard(s) should always be used where foot & pedal traffic is permitted. Users -- especially the disabled -- should not have to lift their bikes, step over, or cycle around a lengthy stone wall to access the Estate.
Posted by Frank Warnock at 6:49 PM No comments: