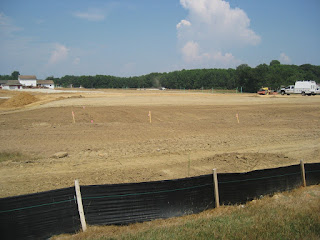 How ironic is it that Sen Townsend and Rep Osienski go around telling everyone that blame for losing the Orphanage Property falls squarely on New Castle County. We hope that anyone listening to them sees this for what it is; a LIE. Not only does the State of Delaware have the ultimate authority and veto power, but the laws of County governance all come from the State, i.e.

§ 1166 Election of County Executive and officials of the county governing body.

(a) County Executives shall serve a term of 4 years and shall be elected in even-numbered and presidential election years.

(b) The officials elected to district 13 shall serve a term of 4 years and shall be elected in even-numbered presidential election years. (more)

See it all here, pages upon pages of strict laws for how the Counties are to operate:  http://delcode.delaware.gov/title9/c011/sc04/

Yet Osienski and Townsend actually tell their constituents that they couldn't attend the buyout negotiations between Exec Meyer and the Felician Sisters -- even with the State half stakeholder? That from early on, the two couldn't pull Diller aside, and with the ultra-critical nature of STOP, demand that she take charge and/or be a champion? That they couldn't investigate the many serious allegations brought forward by STOP Advocates, including the breach of NCC Code with the failed traffic impact study? What about Meyer's ethics scandal with the developers and the Parks Team, that was dismissed by the so-called NCC "Ethics" Commission? That the buyout couldn't be made solely from the State side, of which there is plenty of precedent? That they couldn't pursue Eminent Domain? Shall we go on?

We sincerely hope you're not believing them, folks, because they are going to go around to meetings, canvasing, attending events, and denying everything in order to stay competitive come November. The facts are very transparent; both Legislators could have made STOP happen, and they chose not to. They chose to leave our fate up to an incompetent Councilwoman Diller, and a newly elected NCC Exec Meyer, after keeping it a secret for 2+ precious years from 2013-2015. News of the Nun's intentions (and by then the full exploratory plan) was leaked in 2015, but that was too late for past Exec Gordon; had citizens and Advocates known sooner -- while he was still in office for a time -- he surely would have committed to saving the land as a regional park.

Don't believe them, folks. Sad as it is, former STOP Advocates are putting their own 3rd party loyalty aside in this election cycle, to actively advertise and campaign for viable opposition candidates in the 2-party system. That is a major sacrifice for us/them, but it's time to clean house, regardless. Stay tuned in the weeks and months ahead for events and opportunities to attend and/or volunteer!