STOP: No word yet on the Adverse Possession Claim

There has been no official word yet on the Adverse Possession claim/lawsuit, which threatens to reduce the Chestnut Hill "Preserve" development to only one access point in one direction on Route 4. It is difficult to imagine everyone U-turning in or out and not effecting safety and congestion issues through Ogletown now, including existing LOS failures at intersections. That, and having to navigate through low income housing as a daily routine. Both of these issues, for every new resident's average 9 car trips per day, per household according to FHWA statistics. The McMansion people back in the woods are just going to love that, aren't they?


The question we are asked daily is this; how will Sipple (the developer) deal with this; will he simply accept the limited access and go forward with the full plan anyway? Or will he look to buy ROW from Holy Family Church, perhaps through their parking lot? An off-alignment connection, that can only use Gender Rd, is seen as a critical part of the plan -- not just to Sipple, but to DelDOT as well.

According to the Unified Development Code (UDC), a signalized 2-way intersection is compulsory when a development exceeds 300 dwelling units (DUs). The Chestnut Hill so-called "Preserve" is 269. They seriously want this second connection out to Gender and that's why this lawsuit is taking place (supposedly it is; Advocates have heard nothing). 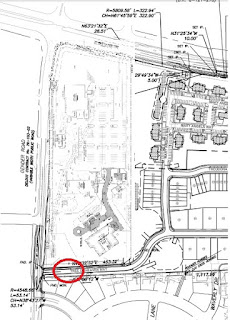 Assuming the case is genuine, and Mr Stranahan isn't bought off, our prediction here at STOP is that he -- the plaintiff -- wins his claim for Adverse Possession. Sipple's "Tree of Heaven Way" is now blocked from Gender. Sipple then goes to Holy Family Church; if they don't give up enough ROW for a through road segment, they will refer back to their original plan of connecting to Waverly Rd in Breezewood, making Skyview the through road out to Gender. Townsend has already insisted this won't happen, however, he and Osienski have proven time and time again that they are a joke; they are weak and ineffectual at stopping or standing up for anything, unless they or their minions profit from it, of course.

The other thing we should look for -- assuming all these second connection ideas fail -- is DelDOT reconstructing Route 4 at that location and adding a signalized intersection. If not now, then inevitably down the road. That would come at taxpayer expense, of course. But then hey, why not, right? They keep raising taxes to pay for all of the services that these new DUs require, that NCC cannot afford. The Legislators and County Council have already lowered property values on area residents by allowing Section 8 housing, and stripping any notion of a regional park -- which would have enhanced quality of life and increased property values. They're just batting a thousand, aren't they?
Posted by Frank Warnock at 9:56 AM