By Lex Wilson, Delaware On-Line -- State money has boosted an effort to create a park on a former orphanage property in Ogletown, an effort to fend off a proposed 269-home development.

Tucked inside legislation that funds state construction projects is a commitment for the state to pay $1.25 million toward the purchase of a portion of the former Our Lady Of Grace Home for Children property.

"It is a huge step forward," said State Sen. Bryan Townsend, D-Newark, who sits on the committee responsible for crafting the state's legislation for construction. "The key question at the county level is, are they similarly able to formalize a financial commitment to making this park possibility a reality."

The state's current commitment will only cover a portion of the $5.9 million appraised value of the property. New Castle County Executive Matt Meyer said his government is evaluating how much money it can put toward the proposal.

"The state's work done. It is now fully on the county to act," said Angela Connolly, co-founder of a residents' group bent on preserving the property. [Full story ...] 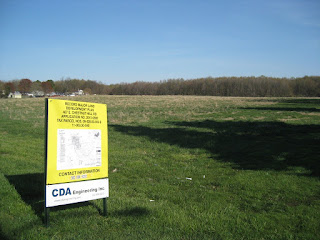 Posted by Frank Warnock at 1:32 PM

Email ThisBlogThis!Share to TwitterShare to FacebookShare to Pinterest
Labels: Land Use, Progress, STOP