Cross-posted from County Comments, Newsletter of the Civic League for NCC 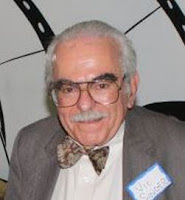 By Vic Singer | A News Journal Aug 25 article erected a tombstone on the effort to force County or State government to buy the former Route 4 orphanage parcel -- "Chestnut Hill Preserve" -- for use as a public park. It was futile because standing law neither demands -- nor prohibits -- that outcome. The battle over the opposite situation -- what constitutes lawful and timely use of the parcel -- is about to begin.

The controlling law in New Castle County is the Unified Development Code, UDC, Chapter 40 of the County Code, enacted long ago by NCC Council. The "Intent" paragraph of UDC Article 1 and the "Purpose" paragraph of UDC Article 5 announce that the purpose of the UDC is to implement the County's Comprehensive Development Plan by establishing controls enabling development of parcels of land no worse than concurrently with the infrastructure needed to support the occupants of the parcels.

Section 40.01.015 "Intent" says: "This Chapter is intended to protect the interests of both current and future County residents and neighbors from the potential adverse impacts of land uses. At the same time, this Chapter is intended to respect landowners' rights to the beneficial use of their property. The regulations contained in this Chapter were designed to encourage greater flexibility and more development options while minimizing development impact on current property owners and the environment."

And Section 40.05.000 "Purpose" says: "This Article establishes the actual development capacity of individual sites based on current adequacy ("concurrency") of roads, water, sewers, and schools."

Several varieties of infrastructure are listed in Section 40.05.000. Transportation system capacity is addressed as follows: "The County has numerous areas of congestion that may limit the development potential of a site. Each proposed development is allocated capacity based upon a traffic impact study for the proposed development. The allocation of this capacity sets a maximum development potential for each site." Later in the UDC, Section 40.11.210 establishes as the threshold of acceptability, the "D" Level of Service (LOS) in publicly sewered areas. It also provides that an intersection presently serving at the "E" LOS is acceptable if improvements already being constructed or covered by existing DelDOT contracts for construction will bring LOS to the "D" level.

The UDC's Section 40.11.000 states that "The purpose of this Article is to ensure that development occurs only where there are adequate transportation facilities in place, or programmed for construction. Transportation capacity is allocated to proposed land developments on a first come-first serve basis. The highway capacity shall be determined by a traffic impact study. No major land development or any rezoning shall be permitted if the proposed development exceeds the level of service standards set forth in this Article unless the traffic mitigation or the waiver provisions of this Article can be satisfied."

And the UDC's Division 40.11.100 requires that the applicant for a proposed development submit projected additional traffic on and off peak and describe existing conditions including LOS, to support determining whether a Traffic Impact Study, TIS, is needed. If 50 or fewer peak hour trips are to be added, a TIS isn't required. If more than 50 trips are projected, the applicant must submit a TIS covering a study area, area of influence, established in a Scoping Meeting under Section 40.11.122. The area of influence, under UDC Section 40.11.124, needn't extend beyond the third intersection in any direction from any access/egress feature of the proposed development unless the Land Use Department and/or DelDOT expand the scope at the scoping meeting. 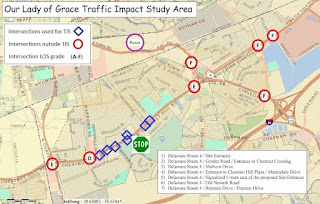 For the Chestnut Hill Preserve TIS, DelDOT did indeed add six intersections to the TIS scope, to include the Route 4 intersections with Salem Church Road and Library Avenue. And a 9/9/2016 DelDOT letter (with copies to the LU Department) reminds the TIS author of that addition and acknowledges the author's and DelDOT's finding that both above-mentioned intersections would be well into the "E" LOS range, and that no remedial system improvements are contemplated. Yet DelDOT didn't object to the subject project proceeding. The obvious reason: the "D" LOS requirement is County law -- enacted by an elected legislative body. DelDOT's own requirement, perhaps less stringent, was given force by an appointed Secretary. Further, DelDOT has a lesser obligation to enforce County law than County staff has. So DelDOT has left enforcement of County law with the County's Land Use Department.

Upon a TIS finding of excessive traffic impact, the applicant has the option under UDC Section 40.11.150 to propose either a new plan or restrictions for the prior plan that would limit the impact to acceptable levels. Thereby, the proposed 265 dwelling unit project would be reduced to provide no more than 50 additional peak hour trips to the transportation system, perhaps 41 dwelling units (DU's).

Yet somehow, acting on the Land Use Department's recommendation, County Council approved recordation of the 265 DU subdivision plan. Responding to this author's prods starting 7/30/2017 on the basis for LU's recommendation, the Department requested a "legal review" regarding its execution of the UDC Article 11 requirements, and on 8/15/2017 advised that "the review concluded that the TIS is consistent with the requirements of the code." LU is concealing the rest of the results of the legal review. That's hard to explain unless the review advises the Department that it has no authority to disregard DelDOT's expansion of the TIS scope of the TIS because disregarding it amounts to a veto of law duly enacted over a decade ago by County Council. Not even the County Executive has such veto authority, and he's elected, not appointed.

It's appropriate for the Department to acknowledge its error in recommending recordation and to proceed according to standing law. LU can truthfully say that nobody bats 1000, and recognize that the story will sound much better if the folks who made the error tell about it. LU should get out in front on this -- by NOT issuing any building permits, just as UDC Section 40.11.000 demands when a valid TIS says the impact is excessive. Otherwise heads will probably roll.

Read a short biography of Vic Singer
Posted by Frank Warnock at 8:37 PM