Drilling down on the Chestnut Hill "Preserve" TIS

Save the Orphanage Property (STOP) Advocates continue fielding questions from concerned New Castle County citizens over the Traffic Impact Study (TIS) for the Chestnut Hill "Preserve". Folks want to know why the Unified Development Code was disregarded in the approval of the project by the Dept of Land Use (DLU) and the NCC Council. As a result, only two steps remain before demolition and construction will begin; closing on the sale of the property with the developer (presumably Joseph Setting II, or involving his company), and then NCC issuing the building permits. According to Senator Bryan Townsend, closing is expected by the end of this week.

The way we see it, the developer will be doing this at their own peril. The TIS is flawed, with DelDOT's findings excluded in the scope. According to Vic Singer, this is irregular and inconsistent with County law:

The area of influence, under UDC Section 40.11.124, needn't extend beyond the third intersection in any direction from any access/egress feature of the proposed development unless the Land Use Department and/or DelDOT expand the scope at the scoping meeting.

For the Chestnut Hill Preserve TIS, DelDOT did indeed add six intersections to the TIS scope, to include the Route 4 intersections with Salem Church Road and Library Avenue. And a 9/9/2016 DelDOT letter (with copies to the LU Department) reminds the TIS author of that addition and acknowledges the author's and DelDOT's finding that both above-mentioned intersections would be well into the "E" LOS range, and that no remedial system improvements are contemplated. (read Vic's entire essay)

Here are the adjustments needed to fix the TIS: 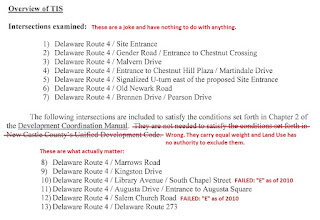 It should also be noted that Vehicle Miles Traveled (VMT) was down significantly in 2010 due to the great recession, and gas prices were approaching $4/gallon. People were consolidating trips, using other means, and/or driving less in general. If these intersections were a grade "E" in LOS in 2010, it's a virtual certainty that they're an "F" now (for a simple chart showing each grade and the delays involved, open the CMS report and turn to page 3).
﻿

Let's hope that God's kindness, love of thy neighbor, charitable giving, and just plain sanity will lead to the Felician Sisters canceling whatever deal is pending with the developers, and go with a NCC/State offer instead. For a whole host of reasons too numerous to mention but thoroughly documented on this website, the correct use of the Orphanage Property is within the public realm, as a regional park.
Posted by Frank Warnock at 9:05 AM