The following has been submitted with an application for a Historical Marker at the grave site of Thomas Ogle, who will have died 250 years ago as of Dec 23, 2021.
Background:
In 1955, when DelDOT first widened State Road (SR) 4 at Salem Church Road, the Thomas Ogle House stood in the way. The State purchased the land containing the house, which included his grave site. Delaware donated the historic house to the Daughters of the American Revolution (DAR), which agreed to relocate it. Unfortunately, the DAR’s plans fell through and the historic house was razed.

The original gravesite, a flat stone slab inscribed with the epitaph of Thomas Ogle, was placed over a slightly raised base. It split into sixteen pieces (large and small) that were removed in the late 1980s during an expansion of SR4. The broken sections, some with illegible or missing words, are being preserved at the University of Delaware’s Center for Archaeological Research. During the period the gravesite became overgrown and unsightly.

While building the new SR4/SR273/Salem Church Road interchange, DelDOT took historic and cultural responsibility for the gravesite. It avoided the grave area by shifting the ramp away. Using proven archaeological techniques, DelDOT expertly and respectfully confirmed that Thomas Ogle’s remains were still at the original location. Without disturbing the remains, DelDOT prepared new concrete footings on which a new brick mausoleum/base was constructed to support a restored capstone. The red brick wall is backed with solid blocks to establish a masonry wall of 6’ 6” long by 3’ 6” wide by 20” high.

Thomas Ogle's restored gravesite commemorates the Ogletown area and the Ogle family influence, but is poorly maintained with no visible emphasis on history, place making and public access. Citing highway safety, no parking of any kind was installed from the SR4/Salem Church intersection. However, the East Coast Greenway (ECG) is a shared-use pathway (SUP) facility along SR4 that passes approx 50 yards' from the gravesite. The ECG connects to the Ogletown Baptist Church (OBC) via a 4' wide, 500' long asphalt sliver of what was formerly Red Mill Road. With no maintenance to speak of, mother nature (the elements) is reclaiming both of these facilities along with the gravesite. It should be noted that OBC greatly expanded its car parking lot since the idea of public access was last revisited in the 1990s. This lot is grossly underutilized except on Sunday mornings, and today serves as defacto gravesite car parking. Either the OBC or DelDOT needs to repave the 4' Red Mill asphalt out to 8' (according to MUTCD guidelines), and the ECG similarly repaved in an inviting manner that includes a spur pathway, bike parking and kiosk immediately adjacent to the gravesite. 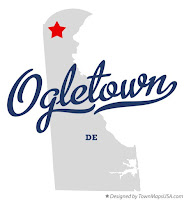 Originally a cross-roads, farming and gathering community, Thomas Ogle and Ogle family generations have lived in the Area for over 250 years. A writer for the Wilmington News Journal in 1998 said it well: “Thomas Ogle’s grave is the last vestige of a town that was founded before the American Revolution and has been virtually under siege ever since”. Large office buildings, condos, apartments, sub-divisions, shopping centers, highways and streets have long since replaced the pastoral setting of Thomas’ days.

Statement of Significance:
Thomas Ogle, (born 1705 in DE, died 23 Dec. 1771 in New Castle Co., DE) was a grandson of the soldier/immigrant John Ogle, (born 1648/49 – died 1684) who came from England with the Richard Nicolls’ Expedition in 1664 and was possibly the first Ogle in the Americas. Thomas became a wealthy and influential businessman and planter in New Castle County, DE. His various businesses, large land holdings and community influence led to the sizable area around his home being named Ogle Town (later Ogletown) sometime before 1762. The stately house, which Thomas operated as an Inn, survived for 216 years. Thomas was buried near the historic house and a reasonable distance from the then narrow, dirt roads that formed the crossroad.

Thomas Ogle’s various businesses, large land holdings and community influence led to the sizable area around his home being named Ogle Town (later Ogletown) sometime before 1762. The stately house, which Thomas also operated as an Inn, survived for 216 years. Thomas was buried near the historic house and a reasonable distance from the then narrow dirt roads that formed the crossroads.

Above: Bicycling to Thomas Ogle's tomb in Spring of 2016. The site appears somewhat maintained as little as 5 years ago. Today, a quarter millennium since his death, it has nearly disappeared under tree overgrowth.