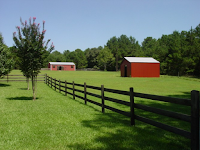 In the Autumn of 2016, STOP advocates worked hard on a campaign to have the Delaware Democratic Party include open space preservation as a plank in their 2017 platform. This was not an endorsement of a particular party; the Democrats just happen to be our State's controlling party at this time. Unfortunately, despite repeated asks, it has either not come up for vote or has been tabled.

Open Space and Farmland Preservation is supported by the overwhelming majority of the electorate, regardless of party affiliation. Countless studies have shown the importance of parkland, natural habitat, and bio-diversity in a community's overall health and well being. Ordinary folks know this. Yet the party that sells itself as stewards of the environment is nowhere to be found, as evidenced by their silence on STOP.

Below is the breakdown of those who signed on in support of the plank. Conspicuously absent is newly elected Congresswoman Lisa Blunt Rochester, whom advocates reached out to  on multiple occasions without success. Obviously, we cannot, and will not tell our followers who to vote for. But we hope that open space preservation is at least one of the deciding factors when they enter the voting booth! 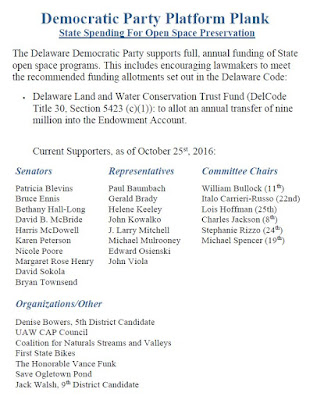 Posted by Frank Warnock at 5:18 PM

Email ThisBlogThis!Share to TwitterShare to FacebookShare to Pinterest
Labels: Land Use