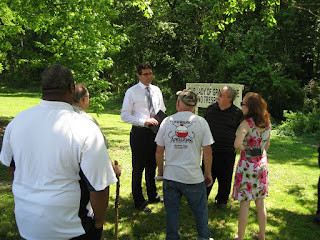 STOP's core advocates met on August 13, and decided that it's time to stop playing political shell games. Since every one of our elected officials and the Felician Sisters leadership have very conflicting stories about their involvement and how they failed so miserably, we decided it's time for each to lay it all on the line -- in writing.

To cement each ones claim that they have worked their hardest to achieve a fair and binding sale agreement with the Felician Sisters, we are asking that they issue us a formal statement. We would like to see this outlined in writing, along with copies of relevant paperwork. It will be their chance to lift some of their political liability, if it's found that they did give it all.

Throughout this entire mess, they too have acted angry and disgusted, sometimes toward STOP Advocates for pressuring them. Bursts of poor decorum resulted. We hope they know and understand too what it feels like to be an advocate in this disaster, and being misled to the point of total confusion. Conflicting arguments were being made between County, State, and Sister's representatives, and we have no idea who to believe. With that, we do want to believe our electeds, and that somehow, this is just some big misunderstanding.

We already have letters and correspondence from the Felician Sisters and their Chief Financial Officer Mark Schafale, but nothing really specific in terms of where they (mainly NCC) fell short. From them, it was always simply "it just didn't work out" or other ambiguous reasoning.

And with that, we approached NCC Executive Matthew Meyer first, and within minutes, he responded with a quick note of confidence and willingness to participate. As follows:

"Thanks. I will ask the county lawyers tomorrow if it is okay to release the documents which will break lawyer client privilege. I have no problem with it. I honestly do not want to play a blame game, even if that means everyone in the community blames me. That is okay so long as I do not do anything that jeopardizes our ability to win this thing in the future.

As I think I mentioned to you, I have been involved in many transactions in the past in which they were over and done with and then they came back (We know it has already happened once here). Don't want to create false hope. I just want to keep the door open slightly until it is slammed and locked." -- Matt

Unfortunately, all indications are (and according to Mark Schafale himself), the door has already slammed and locked. By written word of the Felician Sisters, the developer signed the final contract on August 11.

Hopefully there will be more to come. Stay tuned.
Posted by Frank Warnock at 10:02 AM