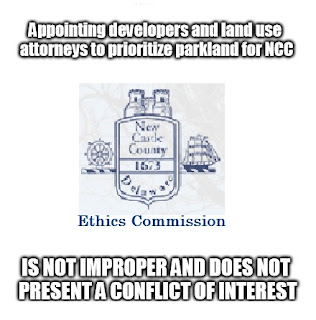 According to the New Castle County Ethics Commission (NCCEC) via email, they carefully considered the complaints by Save the Orphanage Property (STOP) against both NCC Exec Matt Meyer and Rich Hall (Land Use), including a "comprehensive review" of related documents and information from the many individuals involved. The NCCEC voted to dismiss both as charged with respect to the NCC Ethics Code, which sadly, is their only jurisdiction. They say that the facts do not support STOP's claims that the code was violated as alleged in their formal complaint, chief among them, the conflict of interest that occurred when Meyer placed Joe Setting (Orphanage Property Developer) and Mike Hoffman (attorney from the firm representing the Orphanage Property seller) in Chairmanship positions on his Parks Transition Team. The "Team" went on to put Ogletown-S. Newark as 3rd priority for a regional park, knowing full well that, unlike #1 & #2, the Orphanage Property would be this region's last suitable open space and final hope for one. 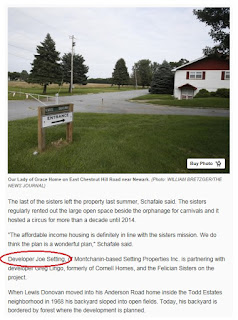 STOP Advocates now await the NCCEC's formal response, a letter outlining their investigation and how they arrived at this conclusion. In the interim, Advocates wrote back with the following advice:

As for the conflict of interest, we hope that the letter of response clearly outlines, and provides proof of just what Mr Setting's position is. If it doesn't, that is not going to look at all good for the NCCEC or anyone else involved in NCC govt. The News Journal plainly stated that Mr Setting is indeed the developer of the Orphanage Property. We suppose it could be an error, or Setting may have relegated himself, given that now Bob Sipple is known as the developer. But until Setting's non-vested position is demonstrated with clear evidence, everyone will go on seeing this as a blatant conflict of interest no matter what NCCEC says. It is something only the NCCEC can do; as citizens, we have no way to determine his position and the composition of his two "Felician" LLCs. We hope the response addresses that, or we will continue to hold Exec Meyer/NCC accountable and fault the EC for failing to cite the obvious.

According to an email of  March 27, 2018, the NCCEC learned through a preliminary inquiry that Setting was in a position where he would profit equally regardless of who purchased the property -- Government or Private. The question STOP is asking is this; is a "preliminary inquiry" sufficient to learn all the facts in this matter, especially in consideration of the Press and the title of "Developer" given to Joe Setting? What is the role of Joe's two LLCs, and who resides on them? If the NCCEC did investigate to this level, and can prove to us that Setting was indeed NOT vested in the outcome of the Orphanage Property, we will have to accept their dismissal. Until then . . .
Posted by Frank Warnock at 10:14 AM