On Dec 23, the date of Thomas Ogle's passing 250 years ago, we visited his gravesite to perform a minor tidy up. During foliage season, the tomb was in danger of disappearing from overgrowth. I was joined by Christopher Thompson George, who removed trash from the site as I pruned back tree branches. Christopher is a published British-born historian of the War of 1812 in the Chesapeake. Among his proudest achievements as an Advocate was helping save the Baltimore County War of 1812 North Point Battlefield of September 12, 1814 from the boot of developers.
As we completed our mission over an unopened bottle of Tott's champagne, I learned that Christopher is 3 years living in Ogletown, and very interested in the local history here after relocating from Maryland. We talked about his above land-use victory in Maryland, and the loss of the Orphanage Property in western Ogletown. It comes with great sadness that no amount of historical significance, environmental imperative or socio-economic needs can overcome Govt corruption in Delaware in matters of land-use.
For the record, saving the Orphanage Property (STOP) was a three year grassroots campaign (2015-2018) to save the last significant open space in Ogletown, Delaware, the Our Lady of Grace 180 acre Orphanage Property, for a regional park. Lost to a deluge of illegal high density development, this was the last chance for the community of Ogletown-S. Newark to fulfill and live the vision promised by Gov Ruth Ann Minner's "Livable Delaware" initiative, or Gov Markell's "Trails and Pathways" or "Walkable Bikeable Delaware" as espoused by Bike Delaware (fraud).
As we continue to mourn the horrific loss above, our effort to add a historical marker and new pathway infrastructure at Thomas Ogle's gravesite will hopefully gain momentum in 2022. This small piece of green space, flanked by highway on and off ramps, is DelDOT-owned and hopefully remains off-limits to developers. Unfortunately, not even the most critical habitat area is truly off-limits in Delaware, and one grave is easy enough to relocate. Even though it is far from ideal for parkland or placemaking given illegal vehicle noise alone, we should still watch and demand protection for this historic plot of land as as the future unfolds. 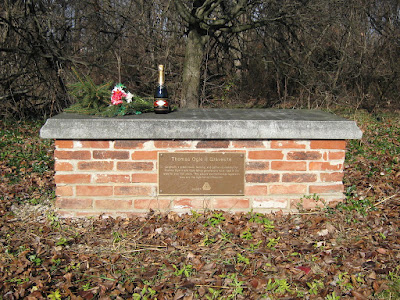