Statistically, Delaware is heading for a road safety disaster in 2022 - in particular New Castle County. Speeding, aggressive and distracted driving is rampant, with injuries and fatalities on pace to surpass even Florida. Despite strict laws to the contrary, many (if not most) offenders have a State-approved aftermarket and/or modified exhaust system. These behaviors account for why virtually nobody rides a bicycle for transportation or recreation -- even after 10 years of Complete Streets policy implementations.

There is virtually no pro-active law enforcement, particularly within Delaware's vast unincorporated zones. Police are few and far between, and spend most of their time answering 911 calls. An active and growing minority of drivers know this, as evidenced by the many vehicles now sporting fully tinted windows (also illegal). Even the City of Newark won't enforce the most deafening and disturbing of "loud mufflers". The lack of such basic government services has Delaware ranking criminally awful (CFPI), especially in matters of transparency. It is a top-5 worst State to live on several key socio-economic fronts, and consistently ranks as most dangerous to walk or ride a bicycle .
Our safety and quality of life is being destroyed right in front of our eyes; vehicle assault and violence is deafening our ears and ruining our health. County and State legislators offer token support, sometimes introducing bills that build on existing laws -- but these come up woefully short on enforcement. Organizations that claim to advocate for bicycling and connectivity have either given up on road safety or appear to be co-opted.

Minus a paradigm shift, and a mass conscience re-awakening toward the common good, things are only going to get worse. The suburbs, which comprises the vast majority of Delaware's built environment, are "entropy made visible", and will not be rescued unless we collectively change our thinking. 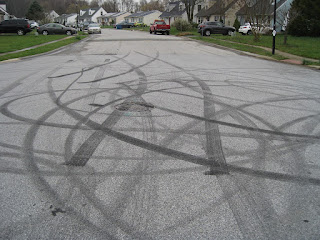 The above assaults are becoming more and more prevalent, even on Delaware's "quieter" neighborhood streets. We are trying to obtain 911 call data, that shows that this is among the most frequent emergency call types in New Castle County (stay tuned). 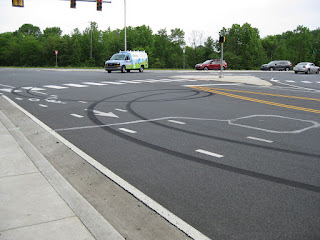 Above: "Bike Lane" on Red Mill Road in Ogletown. Authorities often question as to why so few people ride in Delaware, yet the answer is laid in rubber for all to see.
Posted by Frank Warnock at 9:03 AM