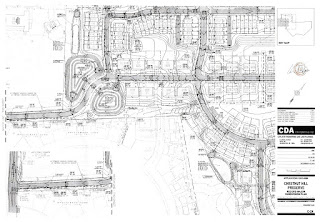 By Angela Connolly --
There's nothing worse than getting someone else to do your "dirty work" for you, but that's exactly what Councilwoman Lisa Diller has done. STOP Advocates were notified by a Breezewood resident, whose property backs directly to the carnage, that a letter was placed in his mailbox a few days ago. The letter was from none other than Bob Sipple, the developer of the Orphanage Property.

Mr. Sipple told the resident that Councilwoman Lisa Diller "suggested" that he walk around and deliver these letters to these residents. Well, this resident called Diller's office, and spoke to Susan Moore, Diller's Aide. Ms Moore claimed to know nothing about what is going on with the property, despite a formal notice of injunction filed a week ago, putting a stop to the construction -- for now.

The District's Councilwoman would be (and indeed should be) intimate with every phase of this nightmare, but apparently she's not. The resident felt that Diller herself should have delivered the letter, either alone or accompanying Mr Sipple. But given the overwhelming blowback this project has generated, it's obvious to most that she is avoiding her Constituents, and will go on ignoring their very real concerns.

Why not give her office a call at 302-395-8345, or e-mail her at EDiller@nccde.org. Let her know that you don't appreciate this gross disconnect, and her lack of concern for the devastation that her inaction has caused. She has not acted on the best interests of her Constituents, and her inaction has contributed to this tragedy, which could have been avoided had she been a strong advocate for STOP.﻿
﻿ 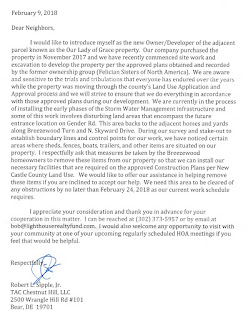 "Friendly Bob" even offers to help squatters, some with adverse possession rights no doubt, relocate. What a guy.
Posted by Frank Warnock at 7:15 AM