Last update from the STOP Campaign -

We have bad news to report. We have been told that NCC is resolute in wanting the Orphanage Property developed, meaning that a way will be found even if the 269 unit plan appears blocked on all sides. DelDOT has informed us that a simple curb-cut on to Rt.4, in one direction only, will suffice if the other options (Waverly and Gender) remain contested. We were not aware of this; we were told on several occasions that bi-directional access to Rt.4 was required. Assuming that the Adverse Possession case succeeds (odds are it will), and Holy Family doesn't sell or give an easement, and Waverly is saved, then the main (and only) access road will simply come off of Rt.4 in the eastbound direction. We surmise that DelDOT will "improve" signaling at Pearson (Todd Estates) to accommodate the increased U-turning traffic at that intersection, being the closest. Obviously, we're not engineers, but really, what other option would there be?

This, today, from DelDOT Planning:

"DelDOT sees value in developments having access to more than one road. Section 3.5 of our Development Coordination Manual addresses what we refer to as connectivity. However, if a property has frontage on just one road, our regulations do not prevent, or necessarily limit, its development"

". . . preliminary word from County is that they do not intend to block this development on the grounds of having just one entrance off of Route 4. Ed [Osienski] and I are digging into the issue to figure out who has the actual decision making authority, so we know whom to contact."

So, this probably explains why construction is continuing unabated. Mr Sipple knows he'll be accommodated, even if it takes bending a few rules. For whatever reason, those in authority absolutely do NOT want our region to have a regional park; instead choosing for us all the ills that STOP has spent nearly 3 years writing and advocating about.

Rep. Ed Osienski was right; if only we had listened to him in 2015 when he would shake his head at meetings, repeating "it's going to happen; it's going to happen. It's abundantly clear now that the decision was already made, years ago. Had the Community been been made aware of this impending disaster back in 2013, when our Legislators knew that the possibility existed, we have no doubt whatsoever that it WOULD have made a huge difference, and quite likely produced an entirely different outcome. 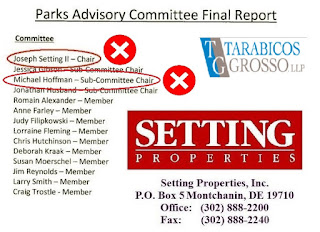 Above: The Orphanage Property developer himself, Joe Setting, along with a land use attorney from the firm representing the Felician Sisters, both served in influential positions on Exec Meyer's Parks Transition Team. They relegated Ogletown to third priority for a regional park, all but assuring their development will go forward. The Orphanage Property represented the last opportunity where suitable open space inventory is concerned.
Posted by Frank Warnock at 6:37 PM