By Frank Warnock, on behalf of the STOP campaign

We're such horrible people for wanting this jewel of a landscape saved, that even the press has abandoned us. We've become toxic, to be avoided at all cost. This, despite the blatant contempt for established county codes and other law breaks going on with the Chestnut Hill "Preserve". Our last press release stirred no interest among any of the major outlets, despite a clear outline of one, final, last gasp potential for a buyout opportunity.


It's such a terrible and rotten thing when you're trying to be a force for good, for the greater good of people, the planet and its indigenous species, isn't it? It's become abundantly clear to Advocates just how anti-environment this county and state has become, even when they know and understand the implications of putting money before quality of life issues.

As what's left begins to fill in, don't think for a moment that so-called "protected" lands now won't come under scrutiny. Traffic sewers like most of N Jersey and SE PA didn't happen without rampant corruption and crushing pressure by development interests ruling the day. Growing up in NJ, I watched it unfold before my eyes, to where reaching any kind of rural countryside and/or habitat area became an hours+ long harrowing car trip away.

Therefore, with so little support coming from those we truly need it from, this is what we can expect. This lack of support was shocking, having included so-called environmental orgs like DE Audubon, DE Chapter of the Sierra Club, DE Wildlands, all of our region's civic groups, etc. as non-endorsers. With all of the attention on the Coastal Zone Act (the darling of Townsend and Osienski, btw), so-called environmentalists have lost sight of the critical need for inland wetlands and open space protection as well. And that's not to mention a sorely needed regional park.

Below is a snip showing the difference. No, the scale on North Jersey wasn't increased -- both are the same. With an exemplary campaign like STOP unable to put the brakes on a disaster like the Chestnut Hill "Preserve", this is what's coming, folks. Fill in the pale yellow, over time, until we are wall to wall bodies with little to no bio-diversity and green space.

The only advice we can offer is to abandon the two party establishment system and start voting for 3rd party candidates whose mission it is to protect the environment and our quality of life. Or, if that's a stretch for you to consider, at least vote anti-incumbent; the Democrats are clinging to a 1-seat majority in the Senate. They have placed the bar so incredibly low, just vote to tip the balance of power, even if it isn't necessarily favorable. 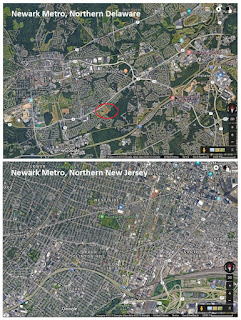 Posted by Frank Warnock at 4:54 PM