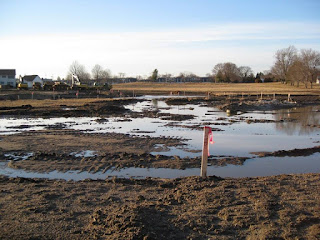 Blogger's note: The description of this suit as an "injunction" was an error and has been corrected in this post to reflect "AP claim".

According to residents on the scene right now, the construction is rolling forward. It was thought that activity would cease until there is a resolution and the plans redrawn. For example, the proposed access road that is now under lawsuit for Adverse Possession (AP) splits two retention ponds. Work is continuing on in this exact spot as we write. Therefore, Bob Sipple and co must be pretty confident that they'll prevail against the resident.

Based on the little we have seen and been told, there are very few options to legally connect the Chestnut Hill "Preserve" to Gender Road if the resident wins his case. One is to ask Holy Family Church for an easement, or to purchase right of way (ROW) through their existing property somehow. The other, that will surely draw mass opposition above all else, is the original plan of connecting to Waverly Rd in Breezewood, or Lynch Farm in Todd II. This would use existing neighborhood streets in those communities as through roads. A simple "curb cut" on Rt.4 is unacceptable by DelDOT regulations, given it would not have 2-way access. And that is all that remains.

Again, Mr Sipple must be pretty confident of his good fortune, or construction would have stopped by now. The claim was filed on 2/6, and the property in contention covers the stand of forested area that the access road penetrates alongside resident's yards. It would all be cleared out, and the road ROW placed directly alongside residents backyards.

The new parish under construction would appear to block any potential of simply moving that ROW northward and on to Holy Family property. Minus the Waverly option, using the Church parking lot would appear all that is left. If courted, and offered enough of a "donation", will they do it? Would the Catholic Church, albeit a different diocese, deny yet another chance at doing the right thing by its neighbors? We hope our legislators have the fortitude to notify Advocates and residents as these moves play out. That remains to be seen, though.

The ideal outcome and the overwhelming favorite of everyone involved is a simple one; our legislators say "enough is enough". They begin lobbying their colleagues on the Bond Committee for emergency buyout funds, and begin drafting a buyout proposal that compensates Mr Sipple for the value of the land (minus the affordable housing, of course) and the work that has already been committed. The work that is being done now, actually -- drainage and grading -- is readily adaptable for use in a regional park, and needed to protect residents from future flooding in any case.

That is all we have for now, everyone. Do not forget that your State and County legislators work for YOU; not the builders, the developers, trade orgs, land use attorneys, or any other fat cats that load their campaign coffers. You have every right to contact them and demand an update, and demand that they must stand firm with the citizen's best interests in mind, NOT special interests.

Posted by Frank Warnock at 9:26 AM