Save The Orphanage Property 4th and final Press Release 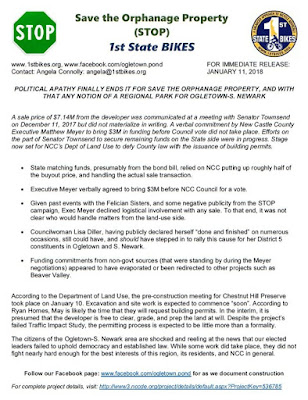 On Dec 11, Joe Setting and Bob Sippel (the developers) were taken out to brunch, basically getting them to the table. The goal was to find out if there was still the remotest possibility that they might consider a buyout offer for the Orphanage Property. It became apparent that both were sympathetic to the cause, and willing to consider a sale price of just over $7M. And with that, the County and State would be gifted another chance to negotiate a deal.

Unfortunately, this did not materialize in writing due to, again, lack of County commitment. New Castle County Executive Matthew Meyer was heard saying that he would consider $3M for County Council to vote on, but wanted no part in the buyout or logistics in any agreement. As the State is ill-equipped, this would leave nobody to oversee the transaction.

Despite the County, it appears that over half of the needed funding had come together on the State side, but without NCC contributing in the manner necessary, it simply wouldn't happen. Councilwoman Diller has put no known effort into convincing Meyer or her colleagues of the importance of pursuing STOP. When it comes to political will, there is nothing we as citizens can do to change it, except in the voting booth, after it's too late. And even then, by virtue of how districts are gerrymandered, even Mrs Diller as an incumbent is considered "safe" for future terms in office.

As seen early on during the first sale opportunity with the Felician Sisters, nothing in either Diller or Meyer's actions suggested that they want STOP to happen. And now, despite the gift of a second opportunity, they have chosen to run out the clock instead.

While the State has appeared the hero in all of this, it cannot be forgotten that all of STOP's district electeds were aware of the Felician Sisters attempts to develop the property as far back as 2011. No one seems to recall any of them bringing this to the community, its leaders, or the press as a "code red". They did not see the value in any of the points and arguments that STOP presented over the last 2 years. Had it been put on the radar, even in 2013, we would have worked under Exec Gordon's watch well before this Chestnut Hill "Preserve" was even conceived, and very likely achieved the outcome that Ogletown so desperately wanted and deserved.

The pre-construction meeting between NCC Land Use Dept and Ryan Homes (builders) took place yesterday. Earth movers are expected to commence clearing, grading, laying the roads, and digging the utilities in the coming days or weeks, according to the DLU. Actual building permits will come in May.

The dream of doing something great for the community is over, and will soon be replaced by a nightmare that nobody wants. Gone is bringing folks together for the sake of the planet, to preserve our quality of life, and address the need for place making in Ogletown. Now, the region will never be the same, nor will they ever have another chance at something like this.

Posted by Frank Warnock at 4:15 PM